Let their books raise the questions 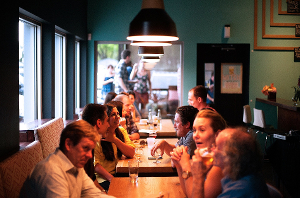 One hour to talk

What would you say if you had just one hour to tell the gospel? In Death in the City, Francis Schaeffer answered:

I would spend 45-50 minutes on the negative, to show him his real dilemma—to show him that he is more dead than even he thinks he is; that he is not just dead in the 20th century meaning of dead (not having significance in this life), but he is morally dead because he is separated from the God who exists. Then I would take 10-15 minutes to tell him the gospel.

Schaeffer argued it takes a long time to understand the ‘dilemma’. Furthermore, if this is not understood, they will not be ready for the good news. Schaeffer’s answer challenged me to change my evangelistic approach.

A couple of years ago I met with six old school friends for lunch. One mentioned the Iraq War and frustrations flowed regarding justification for war. It was time to test Schaeffer’s wisdom. I decided to challenge the hypocrisy of a ‘high’ view of evolved man. I weighed in: “From your evolutionary perspective, isn’t this just a case of more highly evolved nations prospering at the expense of less developed ones? Shouldn’t you just relax and let history/evolution take its course?”

This immediately provoked indignation. So I continued: “Since we are merely intelligent animals, why should we be concerned about killing people? None of us (bar one vegetarian) complain about the injustice in eating the poor cow.”

Discussion moved on until I again challenged them to tell me why, since we were just an insignificant part of a vast and random universe, they felt so strongly about right and wrong: “Surely the randomness and purposelessness of the universe make any absolute right and wrong impossible”. Some contended a logical explanation exists. One challenged me to read The Selfish Gene by Richard Dawkins. They said this would show me “how right, wrong and morals could be derived from a chance universe”.

Accepting the challenge, I read The Selfish Gene. I sent them my critique of its naive and grossly optimistic view of evolution and its appallingly crude argument for ‘morals’ (using statistics!). This led to more correspondence. For the first time the roles had reversed. My friends were trying to justify their beliefs rather than me trying to ‘sell’ Christianity. I learned that non-Christian books unintentionally demonstrate the inadequacy of non-Christian world views.

Now I regularly ask non-Christian friends to recommend books. This gives me the chance to read and think through the implications of the book before going back to my friend with comments to initiate further conversation.

Of course, not all friends anchor their beliefs in books. Some cling to the words of parents, teachers, and even movie stars, often unconsciously. So for some, TV shows and movies may be better conversation starters. No matter the topic area, everyone enjoys discussing their own interests. Once we find what our friends value, we are on the way understanding and testing their beliefs.

Some books worth discussing

In The Consolations of Philosophy, Alain de Botton critiques some famous philosophers and their philosophies of life. He shows how to apply these to problems in our lives. These include: Socrates on unpopularity, Seneca on frustration, Montaigne on inadequacy, and astonishingly, Nietzsche on life’s difficulties.

Here are some examples: “Why is the unreasoning goat content and the reasoning human not?” (p. 121); “We will cease to be angry when we cease to be hopeful” (Seneca); and “Human existence must be some kind of error” (Schopenhauer). More detailed conversation would readily lead to the criticism that de Botton never takes the philosophical ideas to their logical conclusion and that if he did, the book would cease to offer any ‘feel-good’ advice.

Who are intellectuals anyway?

Paul Johnson, in Intellectuals, critically examines moral and judgmental credentials of leading intellectuals. These include Rousseau, Marx, Tolstoy, Hemmingway, Bertrand Russell and Sartre. The result is a fascinating though devastating display of fabricated philosophies, personal unpleasantness and failure to achieve their own standards. This examination is particularly useful in assessing Marxism, existentialism, freedom from morals, etc., since it grounds each idea in their founders’ actions and vices.

In The Female Eunuch, Germaine Greer is outspoken in defence of women’s rights. Greer’s ‘righteous’ anger, ‘moral’ indignation and desire for freedom are evident on every page.

Greer provides us with a rich selection of conversation starters: “Human love is a function of narcissism” (p. 158); “Love from its very nature must be transitory” (p. 274); “Women have very little idea of how much men hate them” (p. 279); “If women are to effect a significant amelioration in their condition, it seems obvious that they must refuse to marry” (p. 358). Finally, Greer’s thesis, that women must be ‘selfish’ if they are to receive the freedom they desire, seems to repulse most people.

Similarly, in Britain on the Couch, Oliver James observes how we have become less happy and more depressed than people 50 years ago. “Angst, depression, suicide, violence, substance abuse... have risen appreciably since 1950” (p. 29). James supplies several reasons for this. We compare ourselves with others, especially in the media, which makes us “feel like losers even if we are winners” (chapter 3). We are “losers in love” (chapter 4), failing in all our relationships. We are involved in “gender rancour” at work and in relationships (chapters 5 and 6).

Surprisingly, James presents pills and therapy as solutions to this depressing analysis. These attract attention as they completely fail to deal with the root causes (family breakdown, sexual warfare and death).

I also recommend two novels. Firstly, How to be good by Nick Hornby (of Fever Pitch fame), which hilariously explores Katie and David Carr’s near marital-break-up. The couple are contrasted trying to ‘be good’. Katie is a caring GP and David, enlisting the help of a ‘spiritual healer’, tests the idea of ‘Reversal’: “You take something you’ve done wrong or some bad you’ve done to someone and you reverse it. Do the opposite” (p. 171).

The second is Generation-X, by Douglas Coupland. This is a ‘story’ (although not much actually happens) about three drifters. They do their ‘McJobs’, complain about the world’s condition, and try to find something meaningful to do. The book’s thrust is meaninglessness: “You are only skimming the surface of life—like a water spider” (p. 149); “I want to hear some small moment from your life that proves you’re really alive” (p. 91).

Some questions to ask

Here are several thought-provoking questions and issues to raise in discussion:

I have now used this reading/questioning method with a number of people (work colleagues in the main) and do find that this approach makes them think more. It also prolongs the conversation because I am asking them questions and getting them to talk. As Ravi Zaccharias has said: “If you allow anyone to talk for long enough, they end up convicting themselves”.

As friends try to justify their beliefs, challenging questions can lead them to convict themselves of foolish reasoning and moral death. Schaeffer counts this vital for evangelism: “... unless he understands what is wrong, he will not be ready to listen...”.