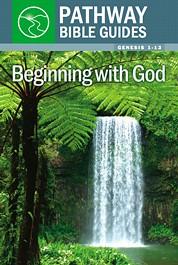 To start at the very beginning, as the song says, is a very good place to start. This is true of the Bible as well. The opening chapters of Genesis lay down some massive foundation stones for all that God proceeds to do in our world, culminating in Jesus Christ.

Beginning with God takes you on a journey through these momentous chapters, pausing to look at creation, the role of humanity in the world, the fall, the spread of sin, the flood and the tower of Babel. The final study focuses on Abraham, the man God chose to begin his great plan of salvation for the world.

God’s plan, as revealed in his word, unfolds step by step. Every part of it assumes that we know something of what has been said already—the more the better. The single exception to this is Genesis. Here the writer assumes that we will be looking forward rather than back. The word ‘Genesis’ means ‘beginning’, and if we really want to find out what we believe as Christians, this is the place to start.

In the early chapters of Genesis, we learn the most basic information about God, his creation, and our place in it as men and women. We learn why the world now is not as it was when it was made. And we begin to see how even at the point where it seemed that all of God’s plans for his creation had been ruined by our sin, nothing could be further from the truth. God was already putting into place his plan to redeem the world through the work of the Lord Jesus. Genesis is the bud of this flower.
In this simple series of studies on the early chapters of Genesis, we focus on the beginnings of this plan, with the occasional glance forward to its fulfilment in the work of our Lord on the cross and in the resurrection. By reading Genesis, we are starting to understand the story of God and the story of our salvation from sin.