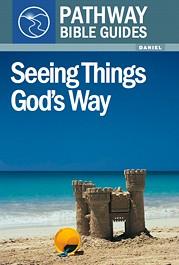 Like Daniel and his friends, captive in Babylon, Christians live as strangers and exiles in this world. We are different. We stand out because we trust in God's wisdom, not the wisdom of this world; we trust in God's forgiveness, in the face of our own evil and the evil of this world; and we trust in God's eternal kingdom rather than the passing rulers and authorities who dominate worldly politics. In the book of Daniel, we find rich teaching and encouragement to keep seeing things God's way in a world that is determined to go its own way.

That’s why Daniel is such an important book. It powerfully reminds us to always see things God’s way. At the heart of the story is a young man named Daniel, far from home, forced to study the learning and wisdom of the empire that had gutted his own, destroying the temple of his God and killing many of his countrymen.

Any Christian who picks up the book of Daniel will find much to sympathize with. Political power and social pressure will push us around, and challenge our faith, in ways that we don’t expect. Where are we going to find encouragement? In Daniel’s God—the same God that rules over the kings of the ancient world is the God who rules today through the king he’s appointed—Jesus Christ.

To get the most out of this Pathway Guide to Daniel, please read the whole of Daniel at least once before you get started on the studies, and ask God to give you his wisdom to live the message that’s in the book.