Tell the old story: Christmas talk advice from the book of Judges 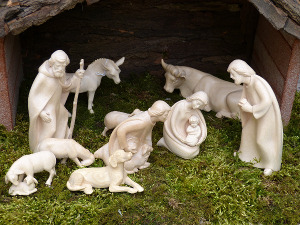 All over the world this week, Christian leaders, pastors and teachers are asking themselves the same question: “What am I going to say at the Christmas service?” From archbishops to Sunday school teachers, as the days of December pass, the tone of the question moves from one of quiet contemplation to mild and then possibly utter panic. (Being invited to speak at a youth group Christmas dinner this weekend, I place myself in the ‘mild panic’ category!)

On one hand, the answer to the question is straight-forward. Talk about the birth of Jesus; after all, that’s what Christmas is about. But, on the other hand, our desire to be creative and engaging and not just present the ‘same old story’ produces in us a voice that says “find an angle, do something a bit different”.

Which (of course!) is where the book of Judges comes in.

For the last three months in our church we’ve been studying Judges. We’ve worked through the judges one by one to learn of the faithfulness of God to his promises, the faithlessness of his people, and the hope we have in the one who comes as the ultimate and long-promised saviour. It has been a challenging series.

But as we finished Judges and moved into the advent season, I was thinking about the relationship between the message of Judges and Christmas. We believe the Bible is one complete story, so it is an important question to ask, especially as the Christmas story is a key part in the climax of the entire biblical narrative.

One of the great themes of Judges is the failure of the ‘new generation’ to serve the God of their fathers. For example, when the generation of Joshua (the generation that saw the conquest of the promised land) dies, “there arose another generation after them who did not know the Lord or the work that he had done for Israel” (Judg 2:10). The result of this lack of knowledge is rebellion against the Lord:

And the people of Israel did what was evil in the sight of the Lord and served the Baals. And they abandoned the Lord, the God of their fathers, who had brought them out of the Land of Egypt. (Judg 2:11-12)

This cycle of the lack of knowledge of God and his great works producing rebellion against God is repeated multiple times through Judges, only to be broken by the Lord raising up a judge to deliver Israel from the suffering under the hands of the oppressor that followed.

But what has all this to do with what I’m going to say to the gathered youth at the Christmas dinner on Saturday night?

So, again, back to my Christmas talk. How does this observation help me?

Christmas is one of those key times in our annual calendar when we have the opportunity to teach ‘the old story’, particularly to a new generation who are becoming less and less biblically literate. At our carols nights, Christmas Eve and Christmas Day services, special dinners and celebrations, we have the opportunity to share the complete and authentic Christmas story, as told by Luke and Matthew, and, through that story, to speak of our Lord and his mighty works. So, by all means, be engaging, be creative—but most of all, tell the old story.

Peter is a CMS missionary serving in Mexico. He’s the director of MOCLAM , an organisation that offers theological education by distance in Spanish, using materials from Moore Theological College in Sydney. He’s married to Sarah, has 3 teenage daughters, and tries to run a marathon every year.