Are we using our memory for the glory of God? 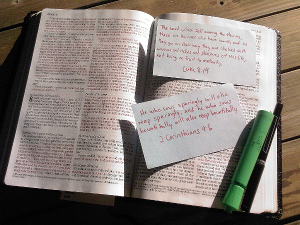 We don’t like to memorize stuff. We find it dull, painful, and pointless. Most of us would rather go to the dentist than spend 15 minutes working on memorizing something. Honestly, did any of you enjoy learning the times-tables in school? It’s rather laborious work. Furthermore, these days we don’t see the point in memorizing much of anything (except the lyrics to our favorite songs). Computers, calculators, the internet, and smartphones have made memorization almost obsolete. Or so we think.

But the funny thing is, we will memorize that which is important to us. It’s really unavoidable. Almost automatically, we’ll remember the names and positions of our favorite football players, the phone numbers of our loved ones, the punchlines in our favourite movies, or the intro spiel to our favorite television show (How many of you guys my age remember the intro to The A-Team? “In 1972, a crack commando unit was sent to prison by a military court for a crime they didn't commit…”). What we remember reveals what we truly value.

If this is the case, then Christians ought to be memorizing God’s word. Scripture memory is clearly an implied duty (Ps 119:11), is modelled throughout the Bible (Matt 4:1-11), makes good common sense, and has been cherished by the saints throughout all ages (William Wilberforce recited Psalm 119 in its entirety daily as he walked to and from Parliament). But we claim we’re too old or too busy or too dumb. We claim we don’t need to memorize because we’ve got the entire Bible on our phone. But deep down I think we realize that these are simply excuses we tell ourselves to prevent too much conviction from coming and forcing us to get off the couch.

In the curious providence of God, recently I’ve happened to read about three examples of remarkable feats of memorization. They’ve really challenged me and caused me to pause and reflect. I share them with you for two reasons. First, I want you to consider: are you using your memory for the glory of God as you could? And second, could our disinterest in or unwillingness to memorize Scripture be a spiritual symptom of a deeper problem?

“Buddhist monasteries in India” during the first to eighth centuries AD required monks to memorize in their entirety extended excerpts from their sacred texts that “would take about eleven hours to recite” (GJ Wenham, Psalms as Torah, Baker Academic, Grand Rapids, 2012, pp. 46-48).

“Some measure of the intense dedication of Muslims in the propagation of their faith is to be seen in the requirement that applicants for admission to al-Azhar University in Cairo, the center of world Islamic culture and the home to in excess of 30,000 students at last report [1995], must know the Qur’an by heart.” (D Larsen, Jews, Gentiles, and the Church, Discovery House, Grand Rapids, 1995, p. 155)

“I am reminded here of a graduate school experience that has made a lasting impression on me. I was amazed to see that my Jewish professors had the Pentateuch memorized completely in Hebrew, as well as large portions of the rest of the Old Testament. When asked about a particular passage, one of my professors would pause momentarily, look up at the ceiling, and then recite the passage from memory. I finally asked him how he could memorize so much of the Hebrew Bible. The reason was that from his childhood he had chanted (sung) the Torah in the synagogue. His pause after being asked a question was to chant the passage to himself before he repeated it to the class in prose form!” (P Enns, The NIV Application Commentary: Exodus, Zondervan, Grand Rapids, 2000, pp. 261-262)

I’ve had two principle reactions to these anecdotes. First, I could anticipate somebody saying, “Memorizing that much material would require tons of work and time. Who’s got time for that?” Well, apparently some Buddhists, Muslims, and Jews do. Why not Christians, those who possess the true Word of God and are truly reconciled to God? And second, if unbelievers can memorize such massive portions of their holy texts, how much more could we with the blessing and empowerment of the Holy Spirit?

I’m challenging you to commit (or recommit) yourself to Scripture memory. And I’m talking about memorizing big chunks of the Bible. Why not set a goal of memorizing the entire book of Ruth or Lamentations or Philippians or Revelation? If you’ve never done this sort of thing before and you’re looking for help, check out Andrew Davis’ ebook, An Approach to Extended Memorization of Scripture.

I’ve already got several of Paul’s shorter epistles committed to memory, but I’m seriously considering something far more audacious, like trying to memorize the Gospel of Mark or maybe the first book of the Psalter. Anybody interested in joining me?