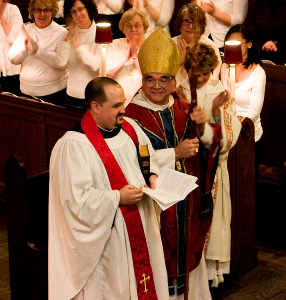 A number of my friends were recently ‘priested’. They took part in a sacred ceremony while wearing strange garments and, standing before the bishop of the land, were consecrated as priests in the church of God.

Coincidentally, at the same time I began preaching through the book of Leviticus (you know, that book you skip during your quiet time). I couldn’t help noting the very stark difference between the role of a priest in the Bible and the modern ones we have in our churches. For a start, I noticed a distinct lack of blood in any of the ordination services I attended (which would have spiced them up considerably). It’s all got me wondering whether ‘priest’ is really an appropriate title for a Christian minister at all.

The role of a biblical priest, as set down by God, was a cross between a butcher, chef, abattoir worker, legal advocate, magistrate, cleaner and dermatologist—they were even responsible for checking out mould and mildew in people’s homes (Lev 14), a task that your modern priest has probably never attempted (depending on the state of the rectory). There’s was a bloody work; they’d have been well-acquainted with death, the screams of dying animals and the stench of blood. A far cry from Father So-and-so down the street in his shiny white cassock.

However, although a priest performed all these different tasks, the tasks served a greater purpose: that of representing someone else before a holy God, of interceding on their behalf. We understand representation in modern life: professional athletes have managers, in court you have a lawyer, and everyone has politicians—all meant to represent us before someone else, to speak and act on our behalf. So too the role of a priest. They were to stand between God and a sinner and mediate what had become a broken relationship.

This is why it was so important that they were consecrated in a thorough way, and why such immaculate detail was required for the way they dressed, behaved and functioned (take a cursory skim through Leviticus and you’ll see what I mean). They were to come before a holy God, and that was serious business you did not want to get wrong—just ask Aaron’s sons, consumed by fire for their ‘unauthorized’ sacrifice (Lev 10:1-3).

There is a television show on at the moment called ‘Dangerous Jobs’ that features those working in some of the most dangerous and challenging conditions in the world. I’m still waiting for the episode about working in the tabernacle. A sinful human couldn’t simply turn up on God’s doorstep. The only way for people to be in the presence of God was through blood, sacrifice, atonement and representation. Even this failed to keep God’s people in relationship with God, such was the depravity of the human heart. A greater priest was required.

Jesus is that high priest all other priests could never be. He is an eternal perfect priest who offered the once-for-all sacrifice on our behalf: himself. We no longer need another human intercessor now that this great high priest stands before God on our behalf (Heb 7:27). In fact, given the failure of the Levitical priesthood last time God’s people tried it (see the Old Testament), we’d be somewhat foolish to try and return to it.

So why do we call our ministers priests? Is it because we still believe we require someone with special access to God? That atonement still needs to be made for our sins?

Either way, I believe it’s a little insulting to the one who stands forever in the presence of God interceding for his people, and whose death split the curtain into the Most Holy Place in two. Feel like telling that priest that you’re looking for someone better to represent you before God? I don’t care how great Father Bob is, he can’t hold a candle to priest Jesus.

The New Testament does use the term priest, but in reference not to ordained clergy but to all God’s people as a ‘royal priesthood’ (1 Pet 2:9). Not because they make atonement for sin, but because they do stand between God and our world as a ‘middle man’. It is believers who call the world to come and know God and be reconciled to him. We pray for others and beg God to pour out his Spirit for their salvation—and that is how people are indeed saved and their relationship with God restored. The atonement that Jesus has made for the world comes through the message of God’s people as they declare the gospel.

Every now and again, as a minister, people do or say something that assumes I have a special relationship with God that others don’t, or that God listens to my prayers in a way that he doesn’t theirs. I find this terribly embarrassing. If you’re a Christian, then you can pray to God as your father, and you can pray in Jesus’ name, because Jesus intercedes for you. Stop trying to find yourself a good priest, because God’s already appointed the greatest one, and he’s standing in God’s presence on your behalf.