The work of ministry in Ephesians 4:12 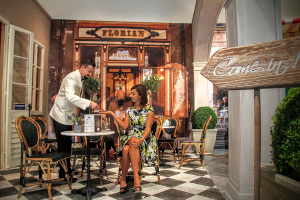 Here’s a little myth-buster for my friends involved with or interested in Christian ministry. Have you heard it said that the Greek word for ‘ministry’ (diakonia) originally meant “waiting at tables”, and so every time you see the word ‘ministry’ in the New Testament you should think of “[humble] service”, like a waiter?

This is a popular view. It has the support of older theological dictionaries (especially the influential Theological Dictionary of the New Testament). I used to believe this view, and promote it. And I know that those who promote the view have right motives. After all, ministers should definitely be humble. So it’s nice if you can have slogans like “the word ministry means service” or “minister means servant” as catchphrases to keep us all humble.

Unfortunately, though, this view is a myth. In 1990, an Australian called John Collins wrote a detailed and convincing book called Diakonia that busted the myth. When scholars (including the most recent reviser of standard Greek dictionary BDAG)1 read Collins’ book, they’re normally convinced by his argument. The problem is that not all scholars have read—or even heard of—the book, so the myth continues.

Collins showed that, in ancient Greek, the word diakonia normally means something like “acting as a go-between”. This could often be paraphrased as ‘bringing’. What matters when you see the word is what is being brought, and why.

Now, sometimes in the New Testament the word diakonia does refer to humble table-waiters who are ‘bringing’ dishes to the table. At other times, though, the word diakonia has nothing to do with table-waiters. In Paul’s letters, for example, it often refers to people who are ‘bringing’ the great message of life and salvation through Jesus Christ from God to people. In these cases, the thing that matters most is not humble service (or dishes), but God’s great message.

That’s what the word diakonia means in Ephesians 4:12. So here it is not talking about “works of [generalized] service” (NIV). Rather, it is talking about “the work of bringing” God’s message to people. That’s the work of ministry.

Well, at least that’s what I argue in the essay that’s just been published in ‘Tend My Sheep’: The word of God and pastoral ministry, and which is available on my website if you want to know more.

1 A Greek-English Lexicon of the New Testament and Other Early Christian Literature, known as BDAG for revisers Bauer, Danker, Arndt, and Gingrich.

Lionel Windsor is an Anglican minister and lecturer in New Testament and biblical languages at Moore Theological College, Sydney. Lionel became a Christian in Year 6 after hearing about Jesus from primary school Scripture (SRE) teachers. He's married to Bronwyn and they have three kids. The Windsors are part of the church family of St Augustine's, Neutral Bay. He is the author of Gospel Speech, Gospel Speech Online, and Is God Green?.