The A to Z of Hosea 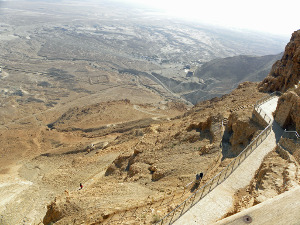 I’m not sure what you’re like, but I find it all too easy to mentally press fast-forward whenever I come across place names in the Bible—and especially in the Old Testament. They sound so unfamiliar; placing them on a map feels like playing ‘pin the tail on the donkey’; and to top it all off there just seems to be so many of them. The book of Hosea is no exception. We even had to create a ‘Jargon Janitor’ appendix in our Pathway Bible Guide to try to go some way towards clearing most of them up! However, I’ve discovered that hitting pause rather than fast-forward when it comes to place names repays handsomely.

How can I give you up, O Ephraim?
How can I hand you over, O Israel?
How can I make you like Admah?
How can I treat you like Zeboiim?

We may be somewhat familiar with Ephraim and Israel, the names used interchangeably for the ten tribes that formed the northern kingdom after God’s people split into two. These are the ones to whom Hosea addresses his prophecy. But who, or what, are Admah and Zeboiim? Rare skin diseases? Common Middle Eastern minerals? The two wives of Lamech? (Good try, but no—cf. Gen 4:19.) Move that mental finger away from the fast-forward button!

If you haven’t heard of Admah and Zeboiim it’s not surprising. We could count the number of times they’re referred to in the Bible on one hand (Gen 10:19, 14:2, 8; Deut 29:23; Hos 11:8). However, if I were to say Sodom and Gomorrah, then we might have something more to talk about. Those place names are a bit more familiar—what’s more, we’d be in the right ballpark.

Admah and Zeboiim were neighbours of Sodom and Gomorrah (and you thought your neighbours were bad!) in the territory belonging to the Canaanites (Gen 10:19). In Genesis 14 we’re told that they were part of an epic battle in the Valley of Siddim (keep resisting fast-forward), when Abram rescued Lot from Sodom. Most helpfully for us in understanding Hosea, when the covenant is renewed at the end of Deuteronomy, Moses uses them as part of his warning to exemplify the dangers of turning away from the Lord to serve other gods:

And the next generation, your children who rise up after you, and the foreigner who comes from a far land, will say, when they see the afflictions of that land and the sicknesses with which the Lord has made it sick—the whole land burned out with brimstone and salt, nothing sown and nothing growing, where no plant can sprout, an overthrow like that of Sodom and Gomorrah, Admah, and Zeboiim, which the Lord overthrew in his anger and wrath—all the nations will say, ‘Why has the Lord done thus to this land? What caused the heat of this great anger?’ (Deut 29:22-24).

So Hosea 11:8 actually provides us with a very helpful window into the A to Z of the storyline of Hosea. There are themes contained in this verse that get enlarged throughout the book. We see the heinousness of sin committed against one who has been a husband and a father to his people. We see the devastating judgement that is inevitably provoked in one who is so awesome in his righteousness.

And yet we also see right into the very heart of God. We see a love for his people who have continually turned away from him. We see a love for his people that, despite the inevitable consequences, is so strong that he cannot and will not let them go. We see a love that takes us all the way to another place name: Golgotha, ‘the place of the skull’. There, in the cross of Jesus Christ, God takes our heinous sin upon himself in his Son. Jesus absorbs God’s devastating judgement in his death. And we are assured that God will not make us like Admah, nor treat us like Zeboiim, though we deserve nothing less. God’s love is such that, in Jesus, he will not let us go.

So next time you come across one of those weird place names in your Bible reading, try hitting pause rather than fast-forward.

James has recently written a Pathway Bible Guide to Hosea, which is available on GoThereFor or in print. It's great for groups who are ready to explore Hosea's powerful message about the love of God.

James is Assistant Pastor at Engadine Congregational Church in Sydney, having previously served among university students with AFES in Canberra. He studied at George Whitefield College (Cape Town, South Africa) and at Sydney Missionary and Bible College. He is married to Alison and they have a son, Caleb.