La La Land and the gospel 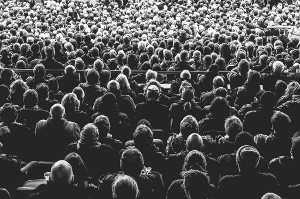 Two recent musical films captured both my attention and my heart. Into The Woods (a couple of years old now) is set in the fantasy world of familiar fairytale characters. La La Land is set in the fantasy world of Los Angeles’ film and music industries. What they both have in common is that they put a twist on the traditional fantasy story. Both challenge the idea of “living happily ever after” (LHEA). Not that these films don’t both conclude with some level of emotional satisfaction, but it occurs in a particularly post-modern way. Into The Woods sees the characters reach the LHEA point at the end of the first act. The second act then deals with the fallout! La La Land is very similar—when the characters kissed early on in the film, I admit I felt a great sense of foreboding!

I won’t say any more about the plots, but I do think the way these films are able to challenge the expected outcome of the fantasy musical, within the context of the very thing it is challenging, is both clever and profound. I have always loved the sense of escape that a musical provides. And while there can be a danger in pursuing fantasy in our lives, what these two musicals do is to present a particularly sober view of modern life. They recognize that we don’t peak with LHEA; we simply can’t maintain that high level of emotional excitement and intensity indefinitely.

The gospel recognizes this too: its description of the incredible peace and joy of coming to know Christ is balanced with the inevitable hard slog of running the race. LHEA is not at all incompatible with the gospel. It’s just that as Christians we recognize we haven’t reached the ever after yet. Like any effective art, the musical gives us a taste of the reality we long for, and can confidently expect. And in the case of these two musicals, despite their moments of sobriety, my heart was never unengaged or not delighting in the joys of the musical moments.

But the musical also reminds us of an important truth about Christian singing. Songs in the context of narrative are life changing. In theatre and film, the songs are where we see the characters shift in their emotional and intellectual engagement with the world. And the nature of the musical is to draw us, the audience, just as much into that change. Sure, this may be superficial a lot of the time. But because of the narrative context, because I am on the same journey, I am able to empathize with the character. Despite the fictional settings, they are feeling the same things I do; they are responding to the stimuli of life in same the way I do (or want to). And because the music is doing plastic surgery with my heart at that point, it is reshaping me in some way.

What does this have to say about the singing of the Christian? Christian song is always (at least I hope always) sung in the context of a narrative: the narrative of salvation. I have argued before that this is how we encounter the songs in scripture—not as stand-alone songs trying to outdo the competition for a place in the Top Ten, but as very real responses to the events and emotions of God’s salvation story. They reshape the heart of the singer in the narrative, and they reshape the hearts of us as readers.

And this tells us something of our singing as we gather as the church: it is the context of salvation that drives the way we choose and lead our singing. As the word of Christ dwells richly in us when we sing, it reshapes our not just our hearts, but influences our words and actions for our new life in Christ (Col 3:17). Singing is life changing, particularly so when that song is the gospel.

Philip is the Music Director at St Ebbe’s Church in Oxford and is director of Emu Music. He has written the music for congregational songs (Never Alone, Consider Christ, Grace Awaiting Me), and the book, Then Sings My Soul, for Matthias Media.