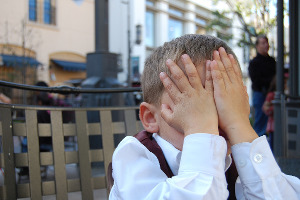 “How do you deal with an annoying person?” sighed my Christian friend as she collapsed onto my couch. “I wish someone would write a course on how to deal with annoying people.”

Sometimes it feels like it would be easier to be non-Christians with the freedom to just ignore annoying people. As Christians, however, this ‘freedom’ to cut people off is replaced with a call to treat people with love, honour and respect. But it’s hard work!

What do I mean by annoying people? These are people we just don’t gel with—for whatever reason. They’re people who don’t get our sense of humour, or who launch into a third monologue when we’re trying to leave church. They’re those people we don’t particularly see eye-to-eye with, or who are so different that we seem to have nothing in common.

We can’t cut people off… but can we ignore them a little?

Well, that depends on what we think church is. Is church a place we go to hang out with our friends? Or is it a place where we feel concern and responsibility for others?

At my church, we’ve been really challenged over recent weeks by our sermon series on the vital signs of a disciple of Jesus. One of the subjects was ‘Prayerfully gathering around God’s word’, which focused on church as a family. We gather as family because that’s what healthy families do. Besides, this is the family we will be in heaven with: “We gather imperfectly now, in readiness for gathering perfectly then” (Craig Hamilton).

Discussions in our small groups have also raised some interesting points. We didn’t choose our earthly family; we were born into it. This also holds true for our church family; it’s where God has brought us to, and the people God has placed us with. And, if we are a family, we have certain obligations.

And looking about at those who sat around him, [Jesus] said, “Here are my mother and my brothers! For whoever does the will of God, he is my brother and sister and mother.”

Now we don’t know who was seated in this circle with Jesus—but it could have included Peter, who Jesus knew would deny him three times. It could have included Judas, who Jesus knew would betray him. It may also have included a guy who told bad jokes, a woman who laughed nervously at inappropriate moments, a man who went on a bit, and a guy with bad breath. Just because we see them in the Bible doesn’t mean they were practically perfect in every way. We have to assume that being annoying has been a stock pillar of humanity since the fall.

Whoever they were, Jesus expressly says that they are his family. And what does family have that a random collection of people don’t? They are bonded by a familial source. They tolerate difference and diversity. There is reason to weather storms together. There is reason to mend broken relationships and heal hurts. They have a sense of responsibility to each other.

As Christians I think it goes even one step more. We are bonded by our unity in Christ. We celebrate difference and diversity. Our church family trains and disciples us to weather storms (Heb 10:32-35). We are exhorted to heal broken relationships (Col 3:13). We are responsible and dependant on each other (1 Cor 12:27, which the TLB translates as “separate and necessary”).

Church shouldn’t be a place where we go to hang out exclusively with our friends. Of course we will do that, but we also need to open our horizons to those other people sitting in our circle. We need to switch on our ‘family radar’ to locate those who are struggling, feeling like an outsider, lost, awkward. They may well be annoying—after all, nobody is as funny as we are, and they haven’t memorized our plans for the day—but that isn’t the point.

The point is that the onus is not on other people to be less annoying; it’s on us to be more loving. Proverbs 12:16 reminds us that “the vexation of a fool is known at once”, and annoyance does have a sense of provocation in it. Vexation has grounds—and yet reacting is foolish. It’s based on me, and what I want. I’m annoyed because what I want isn’t being served.

Jesus considered his followers family. We should do the same. And there are reasons over and above following Jesus’ example. If we ignored all the people who were not like us, or who were hard work or faintly vexatious, our churches would be pretty cold places. We’d become known for being welcoming only if you fit a certain mould, or had the right sense of humour or level of education.

Jesus gave us the command to love each other as he loved us (John 13:34). He sacrificed himself on a cross. On balance, I’m pretty sure I can chat to someone over tea for ten minutes.

Feeling annoyed reminds me to consciously commit my time at church to God and ask: Who can I bless? Who can I connect with? Who can I help to know that they are part of God’s enormous family?