Praying for a train wreck 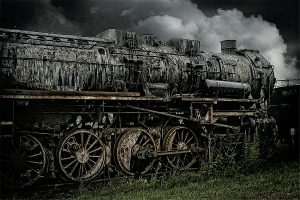 Many mornings, as I walk onto campus at the University of Canterbury, I allow myself to pause and focus on the hundreds of young adults swarming around me. Some of them look bored, while some look harassed and overworked. Some seem ready to attack the day (and anyone who stops their march to the top). Some chat casually to friends and maybe even look happy. Some have clearly come to university to hone their gift of procrastination. Some have their heads firmly down, signaling to the world that they’re closed for business and that contact with another human being might ruin their day.

They’re a diverse and fascinating bunch. But if the statistics are correct—and all my experience tells me that they are—almost none of them will spare a passing thought for God during their day. Almost none of them have the slightest interest in spiritual things. Hardly any of them even know a Christian. They float past me in a tidal wave of spiritual apathy.

I often wonder: What would it take to arouse some spiritual awareness or interest? What could crack the veneer of numbness or open their blind eyes, when everything in their life conspires to tell them that God is irrelevant, Jesus is a curse word, and the world you can see and touch is all that matters?

What should I pray for these precious young people—adored yet adrift, loved but lost—as I think about wanting to see them come to know Jesus? How will the (humanly) impossible ever happen?

My conclusion is that they’d need to experience a train wreck. But does that mean I should ask God to send the train wreck?

In her landmark book The Secret Thoughts of an Unlikely Convert, Rosaria Butterfield chronicles her long, slow conversion to faith in Jesus. It’s an extraordinary book in many ways—not least because it reminds those of us who’ve been Christian for a long time that life is not always horrible without God. People can live pleasant, fulfilled, even joyous lives without being Christians. Sure, we know everyone has problems and life is messy, and we know the gospel provides the only ultimate solution to people’s problems. But we can forget that lots of people enjoy their life without Jesus.

Then God invaded the picture.

Butterfield describes her conversion to Christianity, but then quickly adds:

This word—conversion—is simply too tame and too refined to capture the train wreck that I experienced in coming face-to-face with the Living God. I know of only one word to describe this time-released encounter: impact. Impact is, I believe, the space between the multiple car crash and the body count.1

She goes on to say that her conversion was “not a pretty story”2 and adds another colourful image alongside that of the train wreck:

How do I tell you about my conversion to Christianity without making it sound like an alien abduction or a train wreck? Truth be told, it felt like a little of both.3

She adds, fairly bluntly, “I did not perceive conversion to be ‘a blessing’”.4

When I became a Christian, I’d hardly describe it as a train wreck. But it did mean I had to reevaluate my chosen career—something I’d spent years training and preparing for. Changing course when life was meant to be hitting its stride was distressing. And some of my family members and my friends thought I’d lost the plot. Becoming a Christian was wonderful, but it was hard.

CS Lewis famously describes the night he knelt and prayed to become a Christian, calling himself “the most dejected and reluctant convert in all England … brought in kicking, struggling, resentful, and darting his eyes in every direction for a chance of escape”.5

My point is this: when we long for people to become Christians, we desire a very good thing—the best of all things. But that doesn’t mean they will immediately experience it as the best of all things. Conversion to Christianity may mean giving up a good, pleasant life. It will almost always mean making sacrifices of some kind. It may, at least at first, feel like agony.

Or conversion to Christianity may only happen as the result of some kind of hardship. As people drift along living a happy yet godless life, they may in fact be experiencing the wrath of God. That seems to be the picture painted by Romans 1, where three times we’re told that God’s response to human idolatry is not to smite people with lightning bolts from the sky. Rather, his response is to give them over to idolatry (vv. 24-28). Sometimes God takes his hands off the steering wheel and lets people enjoy a pleasant Sunday drive in the countryside, motoring smoothly and happily away from him.

It makes sense, then, that the opposite can also be true: the mercy of God may be behind the disaster that grabs our attention and reminds us of our need for God, reminds us that all is not as right in our world as we had convinced ourselves. When Jonah ignored God and fled for Tarshish instead of going to Nineveh, did he enjoy the storm that God sent to stop him? Did he enjoy being thrown into a raging sea, or the terror of being swallowed whole by a great fish? God would not allow Jonah to flee from him—but it took a storm to bring him to his knees. To quote Lewis again:

Pain insists upon being attended to. God whispers to us in our pleasures, speaks in our consciences, but shouts in our pains. It is his megaphone to rouse a deaf world.6

Evangelism requires all kinds of boldness, but maybe part of what we need is the boldness to realize that, when we pray for someone’s conversion, what we’re really praying is that their life will become a train wreck—maybe before they’re converted, maybe after, or maybe both. A relationship may have to end. A job may have to be lost. An illness may have to be confronted. An idol may have to be shattered.

Do we dare to pray that God will send the train wreck—if that’s what it takes? Do we trust God enough to realize that, in his mercy, he may give someone an experience that, at the time, feels like anything but mercy? Do we pray that he’ll give people a willingness to count the cost, pay the price, and make the sacrifices involved in following Jesus? Do we remember that a prayer (or an invitation) for someone to receive Jesus as Lord and Saviour is also a prayer that they will “take up their cross” and spend the rest of their life following a crucified Messiah on the path of suffering and death?

Geoff is married to Liz, and daddy to Johanna, Will, Tom and Zoë. He is a full-time staff worker with the Christian Union at the University of Canterbury (in Christchurch, New Zealand). He is the author of The Books of Books, a short guide to reading the Bible, and Giving Up On Jesus, a tract.