Is the Catholic Church a Christian church? 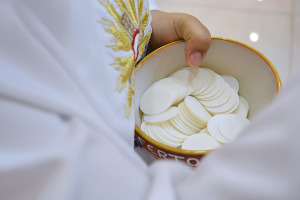 When we talk about God we often need to talk about him in parts. Because God is so big and our brains are so small, we need to be able to talk about him in manageable chunks. That is why we sometimes talk about the doctrine of the Trinity, or of Christ, of the church, of creation, and so on. However, because God is one and presents himself to us as a person, Jesus Christ, he is not reducible to those different parts; all these parts impact on and affect each other. You can’t change your doctrine about Jesus without it affecting your doctrine of the Trinity, for example. That is why when we learn and teach about God we study in a systematic way—so we can understand God best through an integrated and coherent system of truths, not isolated ideas.

Sometimes, as Evangelicals approaching Roman Catholicism, we look at various parts of Catholicism without considering how they relate to the whole Catholic system. For example, some might say Roman Catholics believe in the Trinity and the ancient creeds but that they have got the doctrine of Mary, Christ, salvation, the Bible and the church wrong at various key points. This atomization of Catholic teaching can lead us into saying things like, “The Roman Catholic Church is Trinitarian and creedal, and therefore more Christian than the Jehovah’s Witnesses or the Mormons”. One of the consequences of this error is to be less likely to be intentional in our evangelism of them. However, you cannot have a different teaching about Jesus and Mary and the church and salvation and the Bible without it profoundly affecting your teaching about the Trinity and your understanding of what the creeds mean.1

In this system the spiritual world (the realm of Grace) needs the physical world (the realm of Nature) so that Grace can be expressed in Nature. Also, the physical world needs the spiritual world in order to be perfected so that Nature can be perfected by Grace. An example of this relationship can be clearly seen in the Roman Catholic sacrament of Holy Communion, where the physical elements—the bread and the wine (Nature)—are transformed by the spiritual realm (Grace). Subsequently, when a Roman Catholic (in the realm of Nature) receives the sacrament of Holy Communion (which is transformed by the priest to communicate Grace), he or she can have their Nature perfected by Grace and God’s Grace expressed in their Nature. If this system sounds quite philosophical, that’s because it relies more on Saint Augustine and his 5th century Neo-Platonism and Thomas Aquinas and his 13th century Aristotelianism than it does on the Bible.

The problem with this system is the way sin is minimized: “though marred by sin, tainted nature still possesses a capacity to receive, transmit and cooperate with grace”.3 Nature and Grace are the key elements, and sin is secondary. This results in a religion of progress from a tainted but still intrinsically good state to a better one. In contrast, the Bible presents creation (made good but thoroughly distorted by sin in every aspect) as requiring a supernatural act of God’s grace alone to re-create or regenerate it. This is most clearly seen in the way Jesus redeems fallen human nature by dying to sin and rising to new life. The biblical account of the relationship between creation and new creation is one of radical discontinuity: from death to life, from destruction to recreation (Gen 6:5; Ezek 11:19, 18:31; John 1:12-13, 3:3; 2 Cor 5:17; 1 Pet 1:3, 23; 2 Pet 3:7-10; Rev 21:1).

Also, the Roman Catholic religious system sees the Catholic Church as the continuation of Jesus in the world. One of the ways you can see this is again in their teaching on Holy Communion, where they argue that “the body and blood, together with the soul and divinity, of our Lord Jesus Christ, and therefore the whole Christ is truly, really, and substantially contained”.4 This teaching also impacts other doctrines where the Catholic Church takes on the characteristics of Jesus, like:

There are a number of reasons why Evangelical churches have strongly and consistently resisted this idea that the church, however it is conceived of, is the continuation of Jesus in this world.

The Apostle Paul, when faced with Christians in Galatia turning from his teachings to those of the super-apostles, said not once but twice, “If anyone is preaching to you a gospel contrary to the one you received, let him be accursed” (Gal 1:8-9). When viewed as a system, the teaching of the Roman Catholic Church denies the seriousness of sin and the need for a new creation, distorts the humanity and divinity of Jesus in conflating Jesus with the institution of the Roman Catholic Church, assumes the work of the Holy Spirit on itself and elevates Mary as an idol. They present a different gospel to the one the Apostle Paul fought so hard to preserve in Galatia, and therefore should not be regarded as having accepted the true gospel, nor be considered as a Christian Church. Because of this our Catholic friends, neighbours and family are in grave danger and need our love, urgent prayers and evangelistic efforts!By understanding Roman Catholicism better as a system, we can avoid the pitfalls that can occur when we look at the parts in isolation. We become convinced that we need to be intentional and persistent in our evangelism to Catholics to present them with the biblical gospel. Finally, by understanding how Catholics think about God we can present that gospel in a way that makes sense to them.

2. If you want to read more about this, Gregg Allison’s book, Roman Catholic Theology and Practice: An Evangelical Perspective is a great place to start.↩