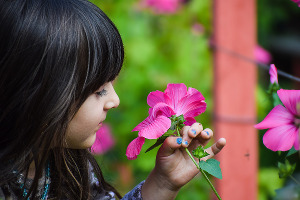 There’s a fine line between words that flatter and words that encourage—so fine, in fact, that the words used might be identical. “You are so beautiful” could qualify as rank fawning; it could also, given the right circumstances, tone of voice, and context of relationship, serve as a genuine statement of appreciation, gently spurring a weary or discouraged person back into the game. It’s important to know the difference, because we are prone to getting it wrong.

Some people avoid encouraging others verbally, in fear of sounding like they’re flatterers. Other people flatter, thinking they’re encouraging, then wonder why people around them are proud and self-centred when it comes time to return the favour. Those in need of encouragement resort to soliciting mere compliments, but it doesn’t seem to help their discouragement. And when sincere encouragement does come our way, many of us get embarrassed and quickly push it off as if it’s flattery, not letting it sink in, fearing it will make us proud.

Here are some ways to tell the difference next time a compliment is paid.

By definition, flattering comes with an ulterior motive. Flattery, according to the Cambridge Dictionary, is “the act of praising someone, often in a way that is not sincere, because you want something from them”. Someone who flatters wants to make a purchase using counterfeit cash in the form of sweet talk (Rom 16:18). Sometimes compliment-paying customers just want reciprocal admiration; other times the stakes are higher and they’re after money, sex, power, or any number of other self-serving commodities. But whatever the case, we learn to use the currency of flattery early on as little children. Flattery is the oldest trick in the book, an unabashed misuse of power (Prov 29:5).

On the other hand, encouragement is motivated by humility. My own personal working definition for humility (a notoriously difficult trait to define) is “the earnest desire and intentional effort to make another person strong”. Real humility is so unselfconscious that it finds no reason to blush or hold back when saying something nice about another person to their face. Sometimes the reason we can’t speak encouragement to another person is that, deep down inside, we are jealous or fearful of puffing them up. But encouragement, which is humble, desires to build strength—and that’s altogether the opposite of puff. Encouragement, rather than misusing power, gives it away for the sake of empowering someone else (1 Thess 2:5-8).

2. Flattery is insincere; encouragement is truthful.

While little kids can be Jedi-masters at flattery, they can also be refreshingly incapable of it (think The Emperor’s New Clothes). Job’s young friend Elihu, after waiting and waiting for one of the older guys to come up with a good explanation for Job’s suffering, finally exploded with the encouragement Job needed: God’s in control and he’s right (Job 37:23).

Elihu was incapable of flattery:

I will not show partiality to any man or use flattery toward any person. For I do not know how to flatter, else my Maker would soon take me away. (Job 32:21-22).

He didn’t pat Job on the back with vain compliments (“You’re a good guy, Job”) or make empty promises (“Everything’s going to work out”). He simply cut through all the lame philosophizing and made the truth plain and clear. And then (humbly) he stepped back to let God prove it himself.

When someone you love is suffering, don’t butter them up with empty praise and man-centred pride; instead soothe them by pouring on the oil of truth (Ps 141:5; Prov 28:23). It may not hit them like a Hallmark card. But it will give them courage.

Often flattery begins with the phrase “You are so...”. Granted, that doesn’t automatically define a statement as flattery, but when what follows is a thick syrup of meaningless praise, it’s a pretty good indicator. Since the flatterer is driven by self-serving motives, it makes sense they would appeal to selfishness in their attempts to get what they want. Pride is flattery’s middle name.

But a proper biblical alternative to flattery is not to refrain from saying anything affirming. God’s people aren’t to be stingy about their admiration, respect, appreciation, and gratitude for one another. Instead, we are to be lavishly encouraging. And biblical encouragement doesn’t begin and end with mere doctrinal abstractions about the attributes of God.

We need to learn to free our tongues to be directly personal at times when someone is losing heart in the work God has given them to do. Whether that work is professional ministry or parenting, persevering in faith or resisting the temptations of a besetting sin, often in addition to needing the gospel truth of the Bible weary souls need to hear something even more firsthand. They need someone who shares life with them—not a book or a blog or a podcast, but a person—to tell them something real and true and historically undeniable about God’s work in their own lives.

Paul was never pinched in giving concrete praise. He noticed the Thessalonians’ “work of faith and labour of love and steadfastness of hope” and commended them for being “an example to all the believers in Macedonia and in Achaia”, even claiming that their excellent example had reached the ears of virtually all the churches (1 Thess 1:3, 7, 8). Would the knowledge of this fame make their heads big? Paul took the risk, knowing that a much greater risk was that their courage would shrink if he didn’t. Paul knew his praise wouldn’t puff them up; he knew it was substantive and would fill them with strength to continue.

Over in Corinth he was doing the same, perhaps even more affectionately: “I have great pride in you” (2 Cor 7:4). He goes into detail, first speaking objective truth (2 Cor 7:10) and then describing fully how he sees that truth playing out in living colour among them (2 Cor 7:11). He finds rich adjectives to describe them: they are earnest, innocent, refreshing, and obedient, and Paul has no reservations in boasting about them to others, because he knows that the good things he sees in them are the very work of God (2 Cor 7:14, 16).

In the final analysis, flattery is something God forbids while encouragement is something he commands—a skill we can all refine and increase for the sake of finishing the race together.