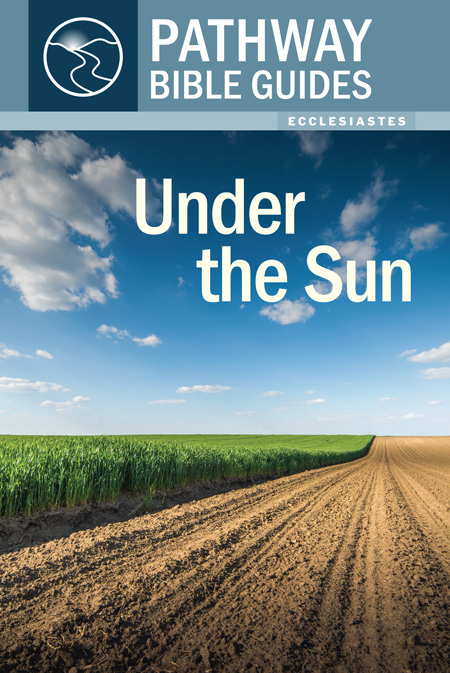 Life is brief and sometimes unfair. Good things happen to bad people, and bad things happen to good people. The hard work of one generation is squandered by the next. What’s the point? Do we gain anything by living well during our time ‘under the sun’, or does it all amount to nothing?

These are the questions to which the one who calls himself ‘the Preacher’ applies his mind and his considerable financial resources. He seeks answers to life’s biggest questions, experimenting and investigating the world around him. Thousands of years later, we can read his observations and conclusions in the book of Ecclesiastes in the Old Testament.

But his world is our world. His questions are our questions. And so the Preacher’s careful observations, honest answers and bold conclusions demand our attention and push us to look ‘beyond the sun’ for ultimate meaning.

The word ‘Ecclesiastes’ means ‘one who gathers others together’. Preachers and teachers gather others together so that they can teach a class, congregation or assembly about the important things they have learned.

The book of Ecclesiastes is an investigation and a report on an experiment in thought and action—we might call it a ‘meditation’—on the big questions of life. What does life mean? Is there any point to it? You work all day, and you spend your time as best you can, and you make good money and wise decisions and you try to do the right thing, but in the end what does it matter? What will it gain you? In the end you’re going to die anyway, and time will march on relentlessly once you’re gone. Is there any point to life that makes living well now worthwhile? And what does ‘living well’ mean anyway? These are the questions the book of Ecclesiastes asks and (sort of) answers.

The way Ecclesiastes presents itself is fascinating. Just as an evening news program features stories that are also introduced by a host, so Ecclesiastes has two voices: the voice of the host (we’ll call him the Editor), who introduces and wraps up the story; and the reporter—called ‘The Preacher’—who prepares and files the story. And that story is a compelling one. The Preacher has spent his whole life looking at life and trying to work out “What does man gain by all the toil at which he toils under the sun?” (1:3). His conclusion? Nothing is gained. “Vanity of vanities! All is vanity”, says the Preacher (1:2). Trying to gain anything in life is pointless. Not exactly what you’d call joyful, is it?

This is not because the Preacher believes there is no God. On the contrary, he talks about God all the time, and assumes that God is involved in his world, albeit mysteriously and at something of a distance. Furthermore, the Preacher’s Editor agrees with him: “The Preacher sought to find words of delight, and uprightly he wrote words of truth” (12:10). And yet the Preacher and Editor still think life is ‘vanity’ (more on what that word means later), even though there is a God! How can that be?

The answer lies in that little phrase ‘under the sun’. The Preacher is investigating what can be ‘gained’ in life as he can see it—from the evidence available to his senses. This is life ‘under the sun’. And from what he can see from life under the sun, nothing can be gained here: all is ‘vanity’. That doesn’t mean he thinks there’s no point in doing anything. Although he may think seeking gain under the sun is futile, he still thinks we can receive good things in life as a gift. That may be a consolation prize, but it’s better than nothing—and, according to the Preacher, it’s all we’re going to get.

But that doesn’t mean that’s the end of the matter. The Preacher may only be able to see and draw his conclusions from life ‘under the sun’, but this side of Jesus we can do much better. We know there’s nothing we can gain under the sun but, in Jesus, we’ve now seen someone enter our world from beyond the sun—and that makes all the difference.