Defend your body with the word 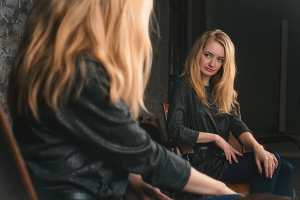 Lately I’ve been feeling unhappy with my body. This is a little new: in the past my body and I got on (well, more or less). To be honest, even though I fed and cared for it, I mostly ignored it. I wasn’t that concerned about my appearance, and there were too many other things happening in my life for me to want to expend valuable brain space on worrying about what I wore, ate or looked like.

But these days, having borne two children and now approaching middle age (with its middle-aged spread!), things have changed. My body and I aren’t getting along. I look in the mirror and I no longer like what I see.

Part of the problem is that we live in an image-focused age. The ubiquity of smartphone cameras and the subsequent saturation of photos is something that previous generations didn’t have to contend with. The media that surrounds us serves as a reminder of all the ways we fail to measure up to society’s standard of beauty. Indeed, even if you resist the impulse to judge others on the basis of their appearance, it’s hard to escape the fact that others will judge you.

But part of the problem, I know, is myself: I haven’t learned contentment. I haven’t fought to infuse my thinking about body image with God’s word. I haven’t wrestled with this because, for most of my life, my body conformed to the pattern of the world—and as long as it conformed, I felt little pressure. But now that it doesn’t, I’ve been caught unprepared.

The God of the body

Unlike what the world tells me, what the Bible says is greatly comforting. The Bible tells me I’m a part of God’s creation: in his absolute sovereignty, he made me in his image, and he made me a person, not an object to be decorated with the latest designer wear (Gen 1:26-27; cf. Ps 8). In addition, he made me exactly the way he wanted me—with straight black hair (not blonde curly hair), brown eyes (not blue), olive skin (not fair), an hourglass figure (not waif-like) and a height of 165 cm (not six-foot supermodel)—no more, no less (cf. Ps 139:13-16). Not only that, he made me different from everyone else: unlike LEGO figures, human beings don’t all have the same face, the same height and the same build. And I rather like the fact that I’m not a carbon copy of you and you’re not a carbon copy of me.

Your body is a temple of the Holy Spirit within you, whom you have from God… You are not your own, for you were bought with a price. So glorify God in your body. (1 Cor 6:19-20)

He goes on to tell the Corinthians (and us) that we can look forward to a bodily future—a glorious resurrection body, imperishable, immortal like Christ’s (1 Cor 15:35-53)—a body that transcends the petty concerns of love handles, cellulite, wrinkles and acne.

It’s comforting, then, that God’s standard of beauty is nothing like the world’s. The prophet Samuel is reminded “The Lord sees not as man sees: man looks on the outward appearance, but the Lord looks on the heart” (1 Sam 16:7). Proverbs points out that “Charm is deceitful and beauty is vain, but a woman who fears the Lord is to be praised” (Prov 31:30). And so Peter encourages women not to trust in their ‘external’ adorning, but instead “let your adorning be the hidden person of the heart with the imperishable beauty of a gentle and quiet spirit, which in God’s sight is very precious” (1 Pet 3:3-4). God doesn’t care what I look like or what I weigh; he loves me all the same.

It’s comforting, yes. But the problem is that God’s view of human bodies—of my body—is often drowned out by the world.

Disappointingly there are no pat answers—no easy resolutions—to the problem of discontent with one’s own body. Instead, I’ve come to the conclusion that it’s an ongoing battle: every day, I need to keep fighting to see myself the way God sees me—to see my reflection in his word instead of between the covers of a glossy magazine.

I don’t want to downplay how hard this is: it’s difficult to ignore the seemingly endless parade of svelte vixens and muscled studs coming at you from all manner of print and screen. To a certain extent, it’s helpful to say to yourself “that’s not real life” every time an image arises that makes you feel bad about yourself: models and photographers use various tips and tricks to make the subject seem more attractive than he or she actually is;1 pretty much everything is run through Photoshop these days; and if you want to look like Gal Gadot in Wonder Woman, you need to train six hours a day for six months. Really, who has that kind of time?

Furthermore, in this age of consumerism, images aren’t purely decorative; they’re focused weapons, designed to sell us something—an object, a lifestyle, a philosophy, a world view. Buy this and you too can look like this! Buy that and you too can enjoy wealth and privilege! Buy this and the world will be yours. Except it won’t. Looking past the gloss and being shrewd about what exactly you’re being sold can help in your fight against discontentment.

It’s also helpful to keep reminding yourself that our societal ideal of beauty is culturally constructed and it changes continually. During the Italian Renaissance, the ideal woman was plump and curvy, whereas during the Roaring Twenties, women aspired to be more flat-chested and boyish. Indeed, one of the significant criticisms of Amy Schumer’s 2018 film I Feel Pretty is that it reinforces contemporary standards of beauty instead of upending them.

But our biggest weapon in this battle will always be the word of God—the word that reminds us that people are people, made in his image, not things to be objectified (Gen 1:26-27); that the body is not to be made into an idol, as God will not tolerate any other gods before him (Exod 20:1-6); that the world, along with its desires, is passing away, so we should not love it (1 John 2:15-17); that you aren’t to conform to this world, but instead you’re to be transformed by “the renewal of your mind” (Rom 12:2); that it is better to please God than to please men (Gal 1:10); that “bodily training is of some value” but “godliness is of value in every way, as it holds promise for the present life and also for the life to come” (1 Tim 4:8); that your identity and self-worth is found in Christ and Christ alone, not in your thigh gap (or lack of) or your dress size (Col 3:1-4); and that your body is for the Lord—“a temple of the Holy Spirit”—so “glorify God in your body” (1 Cor 6:19-20).

I’m sick of having to deal with body image issues. They irritate me, and it irritates me further that they won’t go away; every day, I must go out and combat the world. But it helps knowing, remembering and repeating God’s truths. It helps to highlight and point out the world’s lies. It helps knowing that I am Christ’s and Christ is mine.

And in a way I am thankful that age, childbirth and our media-saturated society has made me think about all this, even though I find it greatly uncomfortable. It’s forced me to work on learning contentment in this area. It’s forced me to think through the Bible’s teaching on physical bodies. Most of all, it’s helped me praise and trust God all the more.

1. I think often of the chapter on fashion shoots in Tina Fey’s Bossypants where she writes, “Don’t ever feel inadequate when you look at magazines. Just remember that every person you see on a cover has a bra and underwear hanging out a gaping hole in the back.” (Bossypants, Reagan Arthur/Little Brown, New York, 2011, p. 151.)↩

Karen Beilharz is a Sydney-based writer, editor and comics creator best known for her work on 'Kinds of Blue: An anthology of short comics about depression' and 'Eternal Life', a science fiction graphic novel with Paul Wong-Pan. (Find more of her work at hivemindedness.com.) She is a former editor of 'The Briefing' and attends church in Sydney's Inner West, where she is heavily involved with their play group. She is married to Ben and together they have two delightful, precocious little girls. Whenever she has a spare moment, she is watching movies, knitting or furiously catching up on her Twitter feed.