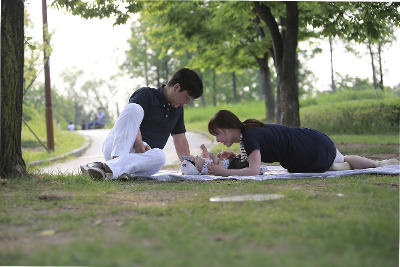 Not too long ago, we celebrated Mother’s Day in my country: an important day for gratefully acknowledging a group of people in our society who are often under-acknowledged and under-thanked! But I’m also very conscious that it can be painful day for many, for a whole host of reasons. So, when writing a letter for our church’s notice sheet for that day, I wanted to remind people that in Christ we don’t just have our birth mothers but many mothers in Christ (e.g. Mark 10:30). I urged our church members to be thankful not only for those who gave them birth in the world, but also for those who have and who do ‘mother’ them in the faith.

At that point I was tempted to talk about the women in the church family who are like spiritual mothers to us. But there was a passage of Scripture that prevented me: 1 Thessalonians 2:7-8. There Paul talks about how he, Silas, and Timothy treated the Thessalonian Christians like a “nursing mother taking care of her own children”. So, according to Paul, even men can be like spiritual mothers to the Lord’s people—and on account of that verse I allowed my Mother’s Day exhortation to remain gender neutral.

In fact, 1 Thessalonians 2 is a fascinating chapter for helping us think through what ministry should look like, because in the space of just a few verses Paul compares himself to a father, a mother, and a child. He employs all three of these ‘family roles’ as part of his description of faithful ministry, thus suggesting a model to us that repays some careful thought.

I want to reflect briefly on how he uses each of these three family roles to help us see different aspects of wise Christian leadership. We’ll work through them in reverse order (from how they appear in the passage)—from the most straightforward comparison to the most complex.

For you know how, like a father with his children, we exhorted each one of you and encouraged you and charged you to walk in a manner worthy of God, who calls you into his own kingdom and glory.

Here Paul focuses on a father’s role in shaping his children’s conduct and behaviour, in particular how a father fulfills this responsibility by the way that he speaks. Paul uses three verbs of speech to try and capture the various modes in which a father speaks to his children to train them to live well: exhort, encourage, and charge. It would also seem that the father’s responsibility carries some sense of authority; he exercises his fatherly authority in the family to urge his children to behave in the way they should.

What we see is that Paul reflects on his ministry amongst the Thessalonians and likens it to the ministry of such a father in his family. With authority, Paul spoke and urged the Thessalonians to live rightly. The way he expresses it is in terms of walking worthily of God.

So, as we reflect on Paul’s description and imagery, we’re left asking ourselves whether the same could be said of our ministry to others, especially amongst those we lead. Are we exercising the authority we have with this kind of concern? Are we using our words (both publicly and privately) to plead with people to live in a way that’s worthy of the God who called them?

But we were gentle among you, like a nursing mother taking care of her own children. So, being affectionately desirous of you, we were ready to share with you not only the gospel of God but also our own selves, because you had become very dear to us.

Here Paul’s emphasis seems to be on maternal affection and care. As Paul envisages it, the care of a mother begins in the heart. She loves her children deeply and wants the best for them. That’s why she nurses them and provides for them. Imagine a new mother staring down with tender love at her baby while they quietly breastfeed. This is the picture Paul draws on.

So when he describes his ministry amongst the Thessalonians, he suggests that this tender love for them was what caused him and his companions to share not only the gospel of God but their lives too. The provision of the gospel is equivalent in this image to the breastmilk the newborn needs in order to thrive. The sharing of their lives is equivalent to the tender embrace with which a nursing mother cradles her newborn.

Again, then, as we reflect on Paul’s language, we’re left to ponder whether our ministry to people flows out of a heart of tender love. Is our ministry characterized by deep affection for those entrusted to our care? Moreover, does our affection for people compel us to feed them with God’s gospel and to share our lives with them openly and warmly?

Nor did we seek glory from people, whether from you or from others, though we could have made demands as apostles of Christ. But we were gentle among you…

From my point of view, to really understand Paul’s point here you need to go to the footnote the ESV supplies after the word ‘gentle’. There we find that some manuscripts contain the word ‘infants’ at this point (instead of ‘gentle’). Thus we enter a significant scholarly argument about which word appeared in the original Greek text. Some manuscripts have epioi (meaning “gentle”) whereas other manuscripts have nepioi (meaning “infants”). Even our modern translations are divided.1

But interestingly, whilst many commentators acknowledge that the manuscript support for nepioi/infants is “older and stronger”,2 they largely argue for preferring epioi/gentle on the basis that it makes more sense in the context. This seems like strange logic to me. Wouldn’t it be better to presume the more reliable manuscript evidence is to be trusted and then try to work out how it makes sense in the context? Indeed, if it can be shown to make sense in the context, then shouldn’t the “older and stronger” reading be preferred? Consider the translation we find in the most recent edition of the NIV:

We were not looking for praise from people, not from you or anyone else, even though as apostles of Christ we could have asserted our authority. Instead, we were like young children among you. (NIV11)

I personally don’t have much trouble seeing why Paul may have chosen this way of expressing himself. Couldn’t Paul be saying something about the exercise of his authority? His point seems to be that, though his ministry could have been conducted on the basis of the apostolic authority he had that was granted by God, he chose instead not to assert that authority. He and his colleagues did not seek the esteem and deference that may have come from asserting their authority, but rather chose to seek only the praise of God (v. 6). They didn’t insist on fair payment for their ministry, but rather worked to provide for themselves while they served the Thessalonians (v. 9). In these ways they were like children. Children have no authority to assert. Children don’t have any of the status that comes with adult authority. Children don’t demand payment for anything.

If the 2011 NIV offers an accurate translation of these verses (and I believe it does), then it introduces us to a third dimension of family imagery in these verses that has often been neglected. In fact, rather than the child image creating a strange clash with the images of Paul as mother and father (as some commentators argue), perhaps it serves as an important complement. I suggest that Paul uses all three family roles as models for his ministry in order to make his case more well-rounded and memorable. I’d even argue that it’s vital that Paul’s reflections on authority here in verses 6-7 are held in productive tension with his comments in verses 11-12 about the use of fatherly authority in his ministry.

Therefore, if we are to think of Paul’s ministry as being exercised in some sense like a child, we are also left to interrogate our own motives and habits on a third front. Do we rely on asserting our authority? Do we seek the kudos that comes with the authority? Or are we, at least in one sense, amongst people like children who have no authority to assert?  Are we willing to lay aside a reliance on authority and any kind of domineering assertiveness, and rather serve people in humility? Are we ready to come alongside people like a child does?

I find the three-fold family imagery in this chapter wonderfully helpful as I think about my ministry as a leader in God’s church. Taken together, these three strands serve as an instructive model for us that prompts searching self-reflection. What Paul asks us to do is remember all three family unit roles, and to seek to conform our ministry to the pattern set by each: like a child, drawing alongside people with humility (rather than relying on authority); like a mother, caring with tender affection; and like a father, using our words to urge people to live worthily for God. May the Lord help us to remember all three of these challenges, and to put them into practice.

Simon Flinders is a husband to Tamara and a father to three girls—Gemma, Lily, and Charlotte. He serves as the Senior Pastor at Northbridge Anglican Church in Sydney. He is also the Patron of Scripture Union NSW, and the chaplain to the NSW cricket team. Simon appreciates the beauty of many things that God has made, but is convinced that the local church is one of the most beautiful. He is the author of Matthias Media's Time To Go? and God's Most Surprising Name.