We are a resistance movement 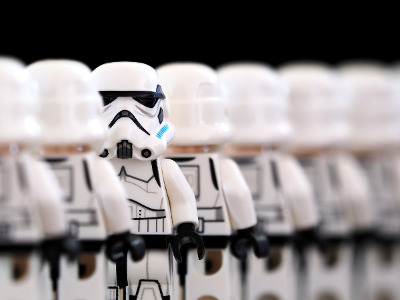 I don’t know about you, but I’m intrigued by resistance movements—those organized efforts by a portion of a populace to withstand a government or occupying power. When those in control are evil, resistance can be seen as an admirable and even noble task.

‘The Resistance’ was strong during the Second World War. Corrie ten Boom, that famous Christian woman of The Hiding Place fame, was part of the Dutch Resistance. Up until her arrest, she helped to smuggle Jews out of Nazi-occupied Holland. The Resistance also features in some classic movies: there is Victor Laszlo of the Czech Resistance in Casablanca; the French Resistance men running the café in The Great Escape who help James Coburn to get over the border into Spain. Resistance movements also feature in some of my favourite fiction. In CS Lewis’ Prince Caspian, for example, the young prince finds himself teaming up undercover with dwarves, talking animals, tree spirits and four children from England to take on and defeat the Telmarine forces who were occupying Narnia.

The book of 1 Peter highlights that we—the Christian church—are a resistance movement. We are an organized group, under God, who seek to withstand and defeat the occupying powers on this planet—the world (the anti-God structures and forces in society), the flesh (our old nature), and the devil.

But, of course, being part of a resistance movement is not all romance. The reality is that resistance—including Christian resistance—involves conflict, and conflict results in suffering, sometimes even death.

In his first letter, the apostle Peter is writing to the Christians in what is modern day western Turkey. It seems that they were facing opposition to their faith in the form of social harassment and verbal abuse (1 Pet 2:15; 4:4, 14). In some ways they experienced a more extreme version of what Christians face in the west today. Peter gives his readers instructions on how to be a good Christian resistance fighter, and in the fifth and final chapter outlines two key qualities of the Christian resistance fighter: humility, and a readiness to resist.

“Humility?!” you might think, “How does that help?” Well, it’s humility of two particular sorts. First, humility to one another: “Clothe yourselves, all of you, with humility toward one another” he urges (1 Pet 5:5). This is the idea also found in Philippians 2:3-4:

Do nothing from selfish ambition or conceit, but in humility count others more significant than yourselves. Let each of you look not only to his own interests, but also to the interests of others.

This is the sort of thing that parents do for their children. Imagine if we all did it for each other in the church! What a united movement we would be!

It’s interesting how different groups react when placed under pressure. If you’ve ever watched children play sport, you may have seen a team who is losing start to fight amongst themselves. Sadly, this can happens with churches too. When we are placed under pressure, do we humbly look out for the interests of others, or do we selfishly think only of our interests, or the interests of our biological family?

Then there is humility before God: “Humble yourselves, therefore, under the mighty hand of God so that at the proper time he may exalt you” (1 Peter 5:6-7). This means we submit to God, bow to his wisdom, and accept what he sends our way. We say, “Okay God, you are God!”

But this is easier said than done. There are so many times when we think we know better than God, when we want our own way or an easier path. When we are surrounded by people who are urging us to drink too much, or to bad mouth someone, or to break the law in some way—and we know that if we stand up for our faith we will get accused of being a killjoy or a fanatic or a do-gooder—will we submit to God or peer group pressure?

The second thing that the Christian resistance movement needs is—as the name suggests—a readiness to resist. “Be sober-minded; be watchful,” Peter writes. “Your adversary the devil prowls around like a roaring lion, seeking someone to devour” (1 Pet 5:8). It may not have been a lion, but I once saw a cheetah in Kenya preparing to attack a small Thomson’s gazelle. The gazelle was happily chewing away, apparently without a care in the world. Suddenly, the cheetah lunged and the race of its life was on. The devil prowls around like that!

We need to be alert and ready. No matter how pleasant our immediate surroundings may sometimes appear, we Christians live in an occupied country. We should not be surprised when people suddenly (and sometimes stridently) oppose our views, criticize us, stereotype us, and misrepresent us. However, sometimes it may be the very pleasantness of our surroundings that forms part of the attack. The devil can put us to to sleep, rendering us spiritually inactive by the comfort of our lives. We need to “resist him, firm in our faith” (1 Pet 5:9). Resistance movements resist! Otherwise they’d be capitulation or surrender movements—and who wants to be part of one of those?

So, when we find ourselves facing social marginalization, loss of promotion, or even (in some countries) assault, imprisonment or death for our faith, how will we resist? Peter doesn’t specifically say, but elsewhere in Ephesians Paul gives us some key advice: “Put on the whole armour of God, that you may be able to stand against the schemes of the devil” (Eph 6:11). He then goes on to list such things as the word of God, prayer, the gospel and faith. Our capacity to resist depends very much on our personal interactions with God.

Usually when resistance of some sort is undertaken, those resisting do not know whether they’ll ultimately succeed. The Resistance in World War II did not know who would prevail, nor did the prince and his resistance in Prince Caspian. But the Bible gives us a great spoiler: the Christian resistance movement will succeed. Jesus has defeated the devil on the cross, the full outworking of which will be seen at the time of Jesus’ return. Resistance is not useless; resistance will lead to restoration: “And after you have suffered a little while, the God of all grace, who has called you to his eternal glory in Christ, will himself restore, confirm, strengthen, and establish you” (1 Pet 5:10). It is a case of resistance now, glory later. What an encouragement!

The Christian resistance movement we are a part of will ultimately triumph!