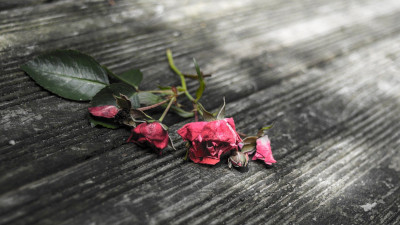 Therefore a man shall leave his father and his mother and hold fast to his wife, and they shall become one flesh. And the man and his wife were both naked and were not ashamed. (Genesis 2:24-25)

This is the picture of godly love that, as Christians, we perhaps know best. It is beautiful and harmonious and perfect. John Calvin said in his commentary on this passage “Among the offices pertaining to human society, this is the principal one and, as it were, the most sacred—that a man should cleave to his wife.”1

Valentine’s Day recently whooshed past us, when every shop I have ever been in to emailed to tell me of the love-related specials that I simply had to have. At the same time, the news was filled with stories of the abuse and murder of women by the very same people who’d probably grabbed them a Valentine’s Day bargain in the past. It’s about as far from Genesis 2 as you could get.

But there are also elements of this incongruity in the Bible, and it’s worth examining them to see what God is communicating to us.

A man shall cleave to his wife

If you start looking deeper into the Genesis 2 passage, it seems a little odd. For starters, Adam had no father and mother to leave in order to cleave to Eve! But, as has been noted, “Here is the first marriage and the author deliberately takes Adam and Eve’s story and makes it our own”.2 This is an act of God’s creation, and communicates the basis of the marriage relationship.

Marriage is built on a new familial unit underpinned by devoted loyalty—cleaving, holding fast to. The original Hebrew here is דָּבַק or dabaq. To get a sense of how the Hebrew writers and readers would have understood this term, we can look at where else it’s used. In Deuteronomy 10:20, 11:22-23 and 30:19-20, and Joshua 22:5, we see dabaq describing how God’s people are to hold fast to him. In 2 Kings 18:6, Hezekiah holds fast (dabaq) to the Lord. In Ruth 1:14, Ruth clings (dabaq) to Naomi; in 2 Samuel 20:2, the men of Judah stayed by (dabaq) David. In Psalm 119:30-31, the psalmist describes how he holds fast (dabaq) to God’s testimonies.

This usage in the Old Testament suggests loyalty and steadfast devotion. A man holds fast to his wife as he holds fast to God’s commands: with persistent and unfaltering faithfulness and dedication. How a man relates to his wife, through dabaq, shows us how God’s people are to relate to him.3

The dark side of love

But there is a dark side to dabaq. In Genesis 33-34, Jacob returns to Canaan with his two wives, Rachel and Leah. He pitches his tent and erects an altar in the city of Shechem, which is ruled by Hamor the Hivite. Dinah is Jacob and Leah’s daughter, and Hamor’s son Shechem (confusingly the same name as the city) “saw her, he seized her and lay with her and humiliated her” (Gen 34:2). Hamor, at Shechem’s behest, tries to get Dinah to be Shechem’s wife, and Dinah’s brothers appear to make a bargain with them for the marriage. Hamor and Shechem greedily agree to the terms, thinking the marriage will open the door to taking over Jacob’s property and wealth. The bargain is a trick though—the sons of Jacob kill Hamor and Shechem and everyone else in the city as retribution for Shechem’s treatment of Dinah. Everything terrible is in this story: kidnap, rape, forced marriage, greed, trickery, murder.

Unnervingly, Shechem “loved” Dinah and spoke tender words to her; Shechem’s soul “was drawn” (dabaq) to her (Gen 34:3). The NIV translates dabaq here as “his heart was drawn to Dinah”. The HSBC renders it as “he became infatuated with Dinah”, and in the NSAB “he was deeply attracted to Dinah”.

There is a translation of the Old Testament into Greek called the Septuagint and sometimes abbreviated as LXX, the Roman numerals for ‘70’. It was called and abbreviated as such because it was translated by 70 (or 72) Jewish scholars, each working on a section, in Alexandria in the 3rd century and 2nd century BC. While it is not a careful translation that we’d want to rely on today, it gives us an insight into how Jewish scholars at the time interpreted their Hebrew Scriptures. The LXX translation of dabaq in Genesis 2:24 is ‘cleave’, whereas the translation in Genesis 34:3 says that Shechem “was attached to the soul of Dina”. This gives us a glimpse of how the word was interpreted and perceived by those early scholars. Given that it is the same word, you could say that “a man shall leave his father and his mother and be attached to the soul of his wife, and they shall become one flesh”. But why didn’t the LXX translate them both that way? I think it’s because cleaving the way God intends includes a devotion and loyalty that is under God and glorifies God. Shechem felt a devoted loyalty to Dinah, but it was an obsessive attachment to her soul. As an obsession with her, God was cut out of the picture.

Shechem was the son of the ruler of the Hivites, pagans living in the land of Canaan. They were among the list of peoples that God would tell Moses and later Joshua to drive out of the land (Exod 34:11). The Bible is describing here how people cleave to women when God is removed from the picture. It can be intense. Dangerous. Damaging. Tragically for Dinah, Shechem’s devotion was focused through the prism of selfishness and obsession. There was no belief structure that would inhibit his impulses. It was not the cleaving that glorifies God in Genesis 2:24.

Of course, nobody is immune to the pull of selfishness and obsession. But, as Christians, we cleave to God and hold fast to his word. That means we not only have a clear vision and framework to curb our darker excesses, but we have a requirement to do so. We cannot hold fast to God when we idolize romance or sex. We cannot serve two masters.

What is striking in Shechem’s disturbing tale is that some of his actions and emotions look thoroughly romantic and acceptable. He loved Dinah, he spoke tender words to her. He wanted to marry her. The difference between Genesis 2 and Genesis 34 is the mutuality of consent. The perfect harmony.

Shechem’s actions were driven by where his heart was. That inhibited his ability (and willingness) to listen to Dinah, to see her resistance and accept it. As Christians, we need to be aware of what we idolize, what we cleave to. Is it to the one we love? Or is it love itself? As disciples striving to grow in Christ-likeness, we have the words of Jesus and the apostles to guide us. With the help of the Spirit, we can develop our patience and gentleness and humility, even in the face of a romantic rejection.

Shechem’s story is upsetting and tragic, but it communicates something remarkable. It is wonderful that God communicates through his Bible to us the jarring incongruity of godly love and ugly love. He shows us this to teach us and grow us. As with all things, we humans can take a good and beautiful thing and twist it into ugliness. The fact that God communicates to us that there is a true way to love each other, founded on his faithful love for us, makes me want to hold fast to him all the more.