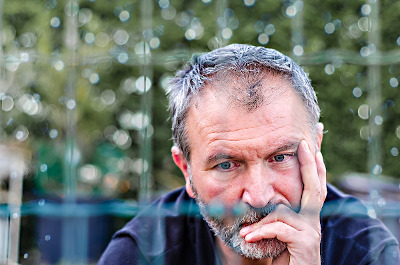 Have you read the story in Mark 9:14-29 recently? Go ahead and take a minute to read it now.

I didn’t really understand the poignancy of this passage before I became a father. It’s natural to worry and fret over your children, but imagine standing in the sandals of this father whose boy has suffered so much.

Meanwhile, Jesus has just descended from the transfiguration and the appearance of Moses and Elijah—and is confronted by a demon, the scribes and the crowds. What a downgrade! Throughout Mark, the scribes resent Jesus for his popularity, the demons oppose Jesus’ authority and the crowds are only interested in Jesus as a celebrity. They are an unholy trio who oppose and impede Jesus at every turn, and here they are all at once.

We don’t know what the scribes and disciples were arguing about, but it was probably over the disciples’ inability to heal the boy. The crowd is possibly excited that they might get to see Jesus perform another party trick, or maybe even fail like his disciples. After all, crowds can be fickle, as they are throughout the final chapters of Mark.

Upon hearing that the disciples have failed to heal the boy, Jesus says:

Does that sound a little insensitive? It’s not my opening line when I do a hospital visit. But this is the third time in Mark’s Gospel that Jesus has expressed distress at unbelief. The first is in Mark 3, when the Pharisees waited to see if Jesus would heal a man with a withered hand and so break Sabbath laws. The second is in Mark 8, when the Pharisees asked Jesus for another sign from heaven as proof of Jesus’ divine identity. And now Jesus seems dispirited by everyone, and perhaps especially by the disciples.

To emphasize this lack of trust, we hear the father’s desperate plea: “If you can do anything, have compassion on us and help us” (v. 22). In other words: “If you can help, Jesus, please heal my boy.” You can feel the anguish of those years of pain.

But Jesus, true to form, wants to do more than fix a temporary crisis. He goes to the heart of this man’s problem:

And Jesus said to him, “‘If you can’! All things are possible for one who believes.” Immediately the father of the child cried out and said, “I believe; help my unbelief!” (vv. 23-24)

And, with that, Jesus heals the boy and commands the demon to never return.

Recently, the famous Christian counsellor and author Larry Crabb passed away. The obituary I read said this:

He argued that Christians could take their thoughts captive. People sought counseling because of bad feelings, he said, which were the result of sin in their lives. But where psychologists had previously told people to express all their bad feelings to get them out, and Christians had traditionally told people to stop doing bad things, the Christian counselor could help people get to the root of the issue: a lack of trust in God. The beginning of healing, according to Crabb, was learning to depend on God.
“Either God has failed me or he hasn’t,” Crabb wrote. “Either he is meeting my needs right now or he isn’t. Christianity demands that I trust God to be faithful.”

God declares throughout the history of Israel and in the person of Jesus that he is faithful. Whatever thought hinders you from trusting God, take it captive and know that God has demonstrated his love and his commitment to you through giving us the Son he loves. Too often, I focus on my lack of faithfulness, perhaps even urging myself to “just have more faith”—forgetting that Christ is faithful and that his faithfulness is all I need. God is faithful; do I believe?

That is what Jesus asked of the boy’s father, and it’s what he asks of each one of us. Jesus is able and Jesus is compassionate. But did the father believe?

I believe in the forgiveness of sins. I declare that every week. But I struggle to forgive one particular person from 46 years ago. I believe. Help my unbelief.

I believe in repentance—but I repeat the same sins over and over again. I believe. Help my unbelief.

How does Jesus react to the father’s cry of trust and simultaneous acknowledgment of his failure to trust?

And when he had entered the house, his disciples asked him privately, “Why could we not cast it out?” And he said to them, “This kind cannot be driven out by anything but prayer.”

The essence of Jesus’ preaching in Mark 1 is that people must repent and believe the good news. The disciples believed half the good news: they believed Jesus was the coming king (Mark 8), but struggled to believe he was the suffering servant of Isaiah who would suffer and be killed but, on the third day, rise again. I think our problem may be that we readily believe that Jesus is the suffering servant who (in the words of Hebrews 4) is able to sympathize with us in our weakness, but we are less inclined to believe he is God’s powerful forever king who rules the world.

Where do you fail to trust Jesus? When do you cry out, “I believe; help my unbelief”? Bring it before him now in repentance and prayer.

Ultimately, only Jesus can overcome unbelief. Only Jesus is in the business of transforming lives. And he will. He cares about our suffering, empathizes with it, and meets our needs. He doesn’t fail us. His death and resurrection offer us a life eternally believing in and experiencing his goodness, eternally in conversation and relationship with him. Ask him and trust him to help with your unbelief now.

Darren is senior minister at LCM Churches. He's married to Simone, and they have three children. When he can, Darren makes his way to the closest beach. You can’t follow him on any form of social media.