Do Catholics and Protestants believe in the same Trinity? 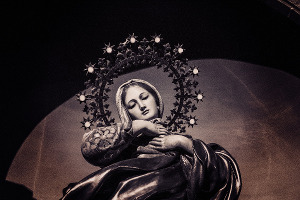 This argument is worth taking seriously since Catholics themselves claim to hold to the Trinity—one God, three persons; Father, Son and Spirit—and to the Apostle’s Creed. Indeed, they say this creed more often than most Protestants do: weekly! Wouldn’t it be better to emphasize what we have in common and call Catholics to respond appropriately to the God they say they believe in on the basis the Trinity and the creeds? It’s a good argument.

One of the things I love about doctrine is that at its best it clarifies understanding and belief. Unfortunately, when Protestants describe the Roman Catholic Church as ‘Trinitarian’ and ‘creedal’ and by implication more ‘Christian’ than Jehovah’s Witnesses or Mormons, it can obscure the differences between Catholics and Protestants, confuse Christians, and inhibit evangelism of Catholics. Certainly the Reformers were not shy in using Trinitarian arguments to point out that Catholics have got God wrong. A great example is Calvin’s letter to Sadoleto, where he argues that Cardinal Sadoleto has misunderstood and distorted the Trinity when it comes to both the doctrine of justification and also the teaching on transubstantiation.

But the distortion goes further than that. Their teaching on Mary appears to smuggle her into the Trinity, turning it into a quaternity. Mary is elevated to the status of being worthy of hyperdulia, hyper-veneration. This is not adoration, which they state is only due to God, but in practice becomes the same (and in many places greater) than worship of God. Her works are synonymous with the works of Christ. The works attributed to Mary are salvation from sin, redemption, and mediation; she ascended bodily into Heaven and has returned bodily to Earth on several occasions to speak an authoritative word of God. Feeding miracles and healing miracles like those of Jesus have also been attributed to Mary by the Catholic Church.

These things distort God as Trinity so much that we may be using the same word but we mean very different things by it. I think we need to speak more clearly on this to help Protestants understand Roman Catholicism better and to help Roman Catholics to understand God better.

As far as calling Catholics creedal, and implying that we share common beliefs, I also think this language can obscure important differences. For example, when I say “We believe in the one, holy, catholic and apostolic church” I mean something different entirely to my Roman Catholic friend or neighbour by the words ‘we’, ‘believe’, ‘one’, ‘holy’, ‘catholic’, ‘apostolic’ and ‘church’.

There is a great deal at stake when it comes to understanding Roman Catholicism correctly. If we as Christians think that most Roman Catholics are saved because they believe in the creeds and the Trinity then we are less likely to evangelize them personally or develop strategies to share the gospel with the many Catholics around us. The result of this is that there are so few Catholics hearing the gospel and coming to evangelical churches in Australia that we cannot measure them statistically!

There is also a question about whether emphasizing the things we have in common with Catholics is a wise strategy at present when the Roman Catholic church (whilst not fundamentally changing) is working very hard to present themselves to the world as being the same as evangelicals by obscuring any differences. Almost every Catholic you meet will think Catholics and Protestants are basically the same, and many evangelicals think that too. Perhaps we need to be a bit more polemic for a while, even though personally I find that difficult.

Do you think Catholics and Protestants believe in the same God, and how does this affect your evangelism?