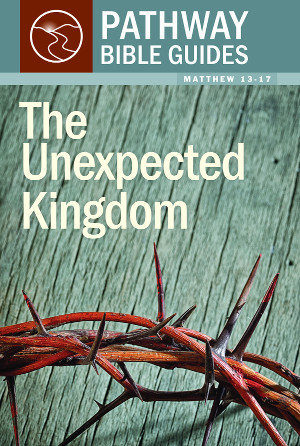 Who is Jesus? And what kind of kingdom does he promise his followers?

These are the big questions at stake in Matthew 13-17.

Travel with the disciples as they walk with Jesus in these chapters, and discover the answers as he reveals them—answers no less astounding today as they were back then.

The Jesus of Nazareth presented in Matthew’s Gospel is a very impressive figure. Right from the start of the Gospel, Matthew shows that Jesus was the descendant of great King David, and God’s promised eternal king. Jesus did amazing and miraculous deeds like no other figure in history. He fulfilled prophecy after prophecy to show that he was indeed the king that God had promised. The Gospel finishes with Jesus, after he’s been raised from the dead, proclaiming: “All authority in heaven and on earth has been given to me” (Matt 28:18).

And yet, sometimes Jesus’ kingdom doesn’t seem nearly as impressive as the king himself. When John the Baptist—who was in prison at the time—heard how Jesus’ kingdom was shaping up, he sent his disciples to ask Jesus, “Are you the one who is to come, or shall we look for another?” (Matt 11:3).

If Jesus was God’s promised king, the one who was going to bring in God’s kingdom by restoring righteousness to Israel, and bringing justice, and setting everything right… then what on earth was John the Baptist, the righteous prophet, doing in jail? What kind of kingdom was this? At that point it looked fairly unimpressive, or even disappointing. In fact, you couldn’t really see much evidence of God’s kingdom at all. And it caused John’s disciples to wonder whether Jesus was really king after all.

These questions aren’t too dissimilar from the questions people have today about Christ and his kingdom—questions like, “How can Jesus be king when his followers and his church are so disappointing and muck so many things up?”

And we can think similarly, especially when the heat is really on or we’re feeling discouraged. We might wonder: “Is it really worth it following this king? His kingdom looks so unimpressive! Is it really worth going through hardships for a kingdom like this?”

These questions and doubts came as no surprise to Jesus. In fact, he totally anticipated them, and not only dealt with them but actually explained why they come.

Perhaps nowhere in the Gospels is this clearer than in Matthew 13-17. In this section we see that as Jesus taught about the kingdom of heaven, he stressed again and again—in both his words and his actions—that this kingdom is different to what people would naturally anticipate: it is an unexpected kingdom. This is what makes examining this part of Matthew’s Gospel both so important and so stimulating. As we begin this section, you should expect to have your assumptions about God’s king and God’s kingdom challenged!

My prayer is that you will respond to Jesus like the apostle Peter, who said, “You are the Christ, the Son of the living God” (Matt 16:16), and rejoice that you are part of this king’s unexpected kingdom.